Total Package Hockey is proud to congratulate the players selected to represent TPH at the OHL Cup, and wish them luck as they begin competing in the prestigious annual tournament.

The TPH Hockey team is a collection of #TPHTrained players from across the country, coached by Francis Anzalone, Scott Nichol, Chris Lipsett and Greg Austin.

TPH is competing against the Halton Hurricanes to start the tournament; later today, they will play the Toronto Nationals.

On Thursday, they will compete against the North York Rangers, and their Friday foe is yet to be determined.

Good luck to the players on the roster below as they compete against some of the world’s best: 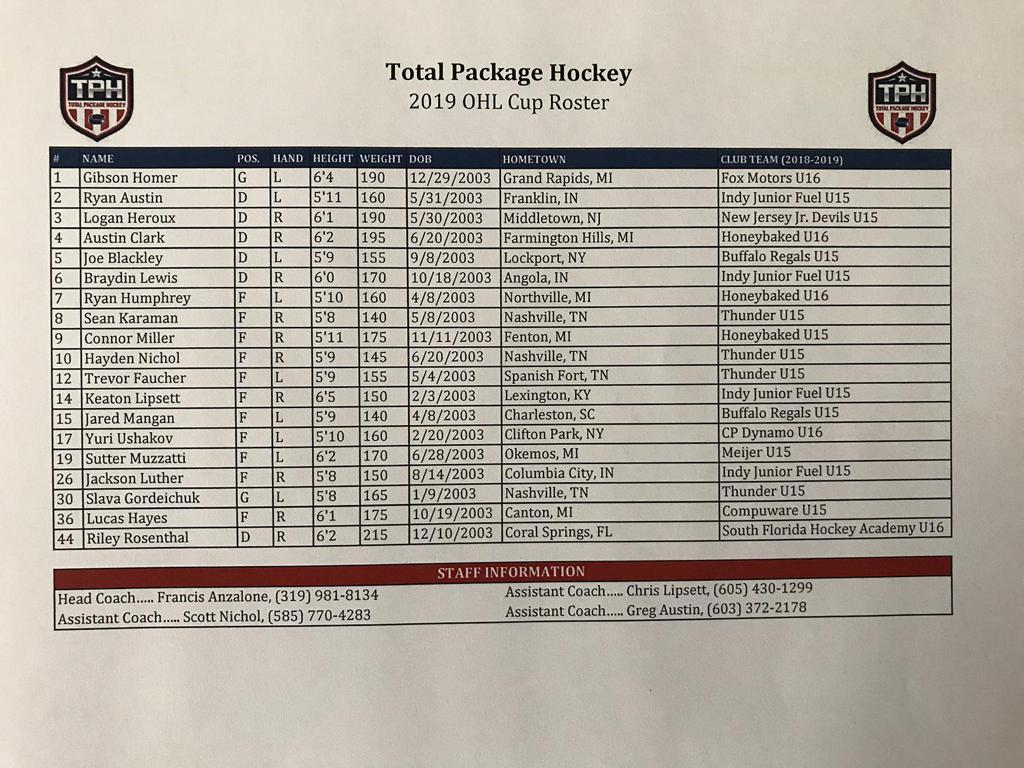 Total Package Hockey is proud to congratulate the team representing TPH at the OHL Cup for a strong tournament showing.

The TPH team reached the quarterfinals of the prestigious end-of-season tournament, recording three wins at the Scotiabank Pond in North York, Ontario.

“We’re very proud of this team and how they performed this past week,” said head coach Francis Anzalone. “For a roster filled with players who had no experience playing together, they did an outstanding job of coming together as a team and supporting one another, all while competing against elite teams in a high-pressure environment.”

The TPH team was a group of #TPHTrained players from across the country (the roster is below).

After falling to the Halton Hurricanes in their first game, the TPH boys rallied to record three straight victories – securing their spot in the quarterfinals in the process.

First, they recorded a 3-1 victory over the Toronto Nationals. Following that Wednesday win, they rattled off Thursday and Friday victories, respectively, over the North York Rangers (5-2) and Brantford 99’ers (4-1).

In the quarterfinals, they fell to the Don Mills Flyers, the eventual OHL Cup champions.

Ryan Humphrey, a TPH Detroit Center of Excellence student-athlete, led the TPH team in scoring with seven points in four games. Connor Miller, a Fenton, Mich., native, was second with six points. Click here for a full statistical breakdown for the team.