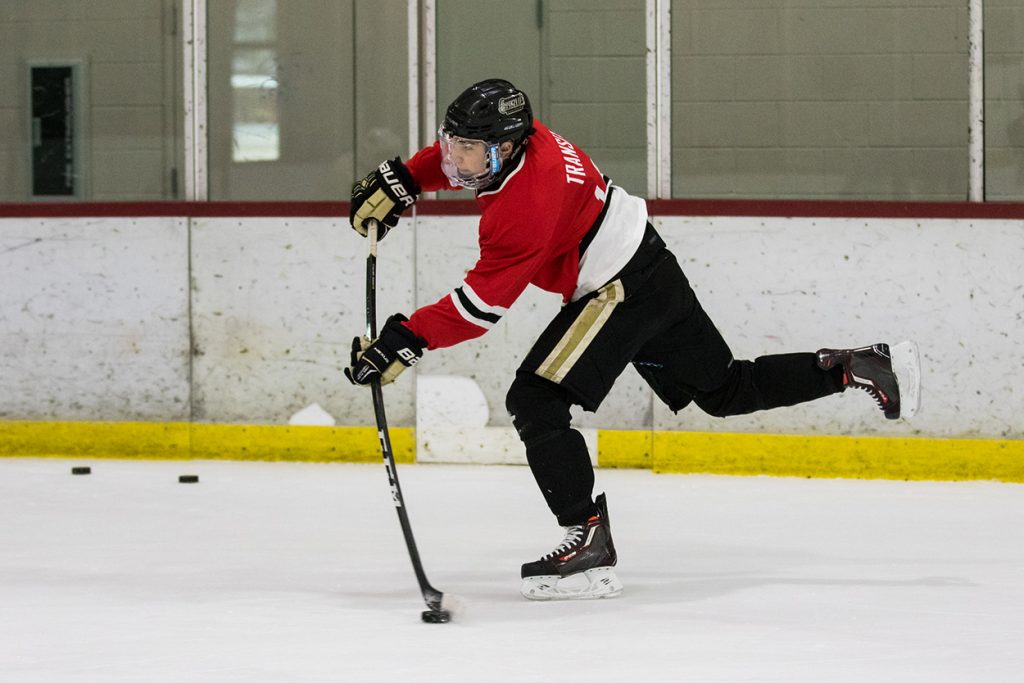 Total Package Hockey Detroit is proud to announce that Jake Transit has accepted a scholarship offer from Ferris State University.

The new Bulldogs commit and Center of Excellence alumnus is a ’99 birth-year skater currently with the Dubuque Fighting Saints, the USHL club that drafted him last spring.

He spent the 206-17 season with the TPH Center of Excellence before making the jump to juniors.

“TPH was one of the smartest decisions I’ve ever made,” Transit said. “The staff is committed to making you the best player and person you can be day in and day out.”

A Royal Oak native, Transit has skated for the Oakland Jr. Grizzlies, Belle Tire and Honeybaked.

“I Picked Ferris State because of how well I connected with the coachs as soon as I met them,” Transit said. “The Bulldogs seem like the perfect fit for me.”

Thunder would like to congratulate ’02 Forward Aidan Flynn on committing to play DI College Hockey for the University of Alabama-Huntsville.

Aidan has been with the Thunder family for five years will begin during the ’21-’22 season.  He is one of six Thunder players to commit to UAH.

Total Package Hockey is proud to announce that Center of Excellence student-athlete Tanner Kelly has committed to Michigan State University.

Kelly, a student at Hazel Park CoE, is a forward currently playing for the Little Caesars 15U team.

“I chose Michigan State because I’m really excited to play for Danton Cole and the awesome program that he is putting together,” Kelly said in an interview with MiHockey. “Also, playing in the Big Ten is going to be awesome because there is so much good competition so there will be many rivalries and I love playing in big games like that when the pressure is on.”

The ’02 birth-year skater moved to Michigan from California three years ago, and he has been a fixture on a Kris Draper-led Little Caesars team ever since.

She spent the 2017-18 season competing against players up to three years older.

Clearly, it wasn’t a problem.

Total Package Hockey is proud to congratulate Detroit Center of Excellence student-athlete Kirsten Simms on her commitment to the University of Wisconsin.

Simms, a 2004 birth-year player, spent the past season playing for the 16U Little Caesars girls’ team – her first year playing girls’ Tier 1 hockey. She played a significant role in the LC squad’s state championship and USA Hockey National Championships appearance.

She’s still a few years away from enrolling, but Simms said she can’t wait to officially become a Badger.

“I picked Wisconsin because I love the facilities, coaches, school, and culture,” Simms said. “Just everything about Wisconsin is right for me. Literally every time I’m there it feels like home and it feels best for me.”

Simms, the daughter of two educators, said college hockey has always been at the top of her list of hockey goals. She will certainly be eligible for enrollment at Wisconsin when the time comes – Simms maintains a 4.0 GPA despite a dedicated training regime on and off the ice.

“I’m so excited to get the chance to play Division 1 college hockey because it has been one of my biggest goals since I was 6 and, on top of it, Wisconsin is my dream school.”

She said she’s thankful of the help the Total Package Hockey staff during her growing hockey career.

“TPH has helped me reach this goal in many of ways,” Simms said. “First of all they have helped me with advancing my skill and teaching me so much that I know – especially my shot. I can even admit that my shot wasn’t very good before I started working with TPH.

“Not only have they helped me as player they have helped me as a person. TPH has done so much for me so far and I am continuing to train with TPH every day to help me reach my other future goals.” Congratulations to Kirsten Simms for being selected to the U18 USA Women’s National Team. In addition to this opportunity, Simms is also a 2022 commit to the University of Wisconsin.

“It is an incredible honor to be selected to this program.  I am very excited and humbled by the opportunity to represent USA as a member of the U18 Women’s National Team.  I really appreciate the many coaches and people who continue to support and encourage me in this journey, and I look forward to keep working as hard as possible to improve as a player and teammate every day” -Kirsten Simms

Simms has always competed at the highest levels of hockey including seasons spent with Compuware, Little Caesars, and Selects Academy. Simms was awarded MVP and Rookie of the Year awards in her first season with Selects Academy.

Simms is a TPH Center of Excellence alum, attending 7th and 8th grade at the Detroit location.  Simms has participated regularly in the TPH 8 Week Progressional Program since its inception as well as other TPH training programs.

We are excited for the opportunities ahead for Kirsten and we will be cheering her on as she represents our country.

GET TO KNOW KIRSTEN

Who are you inspired by?: Kedall Coyne-Schofield for how incredibly hard she works and for her dedication to the growing hockey as a sport.