INDUSTRY GROWTH FUND TO FINANCE FEASIBILITY STUDIES FOR POTENTIAL PROGRAMS, STARTING AT U. OF ILLINOIS

The NHL and NHLPA are committed to supporting the growth of NCAA Division I hockey, introducing a new initiative to fund feasibility studies for potential programs on Friday prior to the NHL Draft.

The University of Illinois will be the first school to conduct a feasibility study under the new initiative, which is funded by the NHL and NHLPA’s joint Industry Growth Fund.

Additional schools will have the opportunity to have feasibility studies funded through the project, which is designed to help spur the growth of Division I men’s and women’s hockey.

“Where high-level hockey is established, youth hockey interest and participation often follows,” NHL Commissioner Gary Bettman said. “By expanding the footprint of elite hockey at all levels, we can inspire new players and parents to join the hockey family. By working to add programs at the Division I level, we hope to grow the game of hockey, both on and off the ice.”

The NHL and hockey participation in general have both expanded significantly throughout the United States in the past 20 years, but the number of Division I programs has not kept pace. | Infographic: The Need for Growth 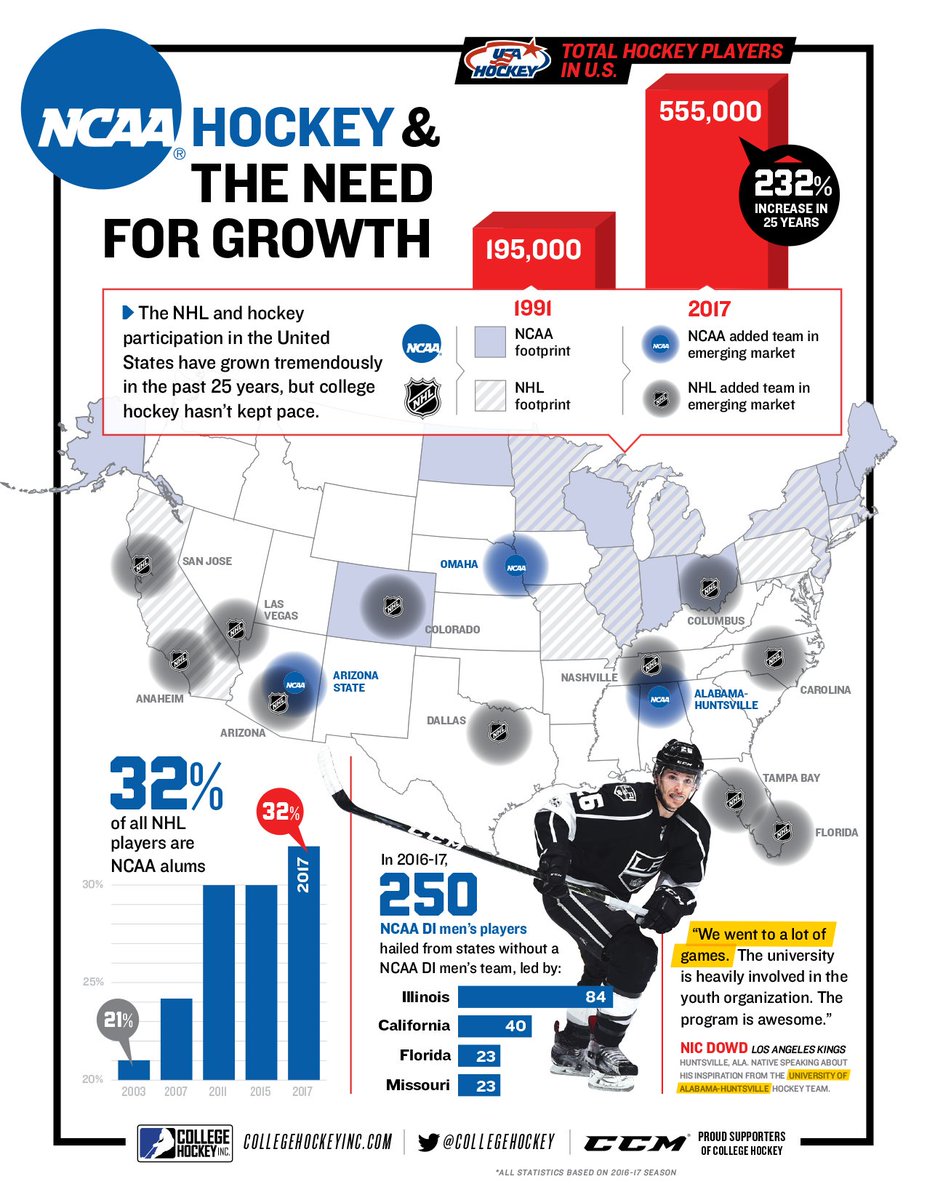 “While I think everyone in hockey has hoped to see programs added, this is a groundbreaking project by the NHL and NHLPA to take the initiative to help make that happen,” said College Hockey Inc. Executive Director Mike Snee. “Those of us at the college level are grateful for the leadership the NHL and NHLPA are showing with this project.”

Illinois is one of many states that has seen an explosion in hockey interest and participation, fueled in part by the recent success of the Chicago Blackhawks. Illinois produces the most Division I players (84 men and 35 women) of any state that is not home to a Division I program. | Infographic: The New State of Hockey

Illinois athletic director Josh Whittman was in attendance at the announcement and was optimistic that the local talent base could help make the Fighting Illini competitive quickly.

“The idea of varsity hockey at the University of Illinois has great appeal,” said Whittman. “With hockey’s popularity in both Chicago and St. Louis, and rapidly growing youth participation across the state, we anticipate tremendous interest in the sport and at our university. We are grateful to College Hockey Inc., USA Hockey and our colleagues with the Chicago Blackhawks, who have been incredibly supportive during our preliminary due diligence.”

The Blackhawks, who hosted the announcement and this weekend’s NHL Draft, expressed their support of the potential for NCAA Division I hockey in the state.

“We’ve had the opportunity to meet with Josh [Whittman] two or three times and every time you are around Josh you feel that energy that he is going to try to get this done,” said Blackhawks President & CEO John McDonough. “When we heard that the NHL was going to participate, it inspired everybody.”

For the NHL and NHLPA, investing in Division I college hockey should produce both immediate and long-term benefits in terms of the health of the sport.

More Division I programs will produce more hockey fans and inspire more young hockey players. They will also provide more opportunities where young players can aspire to play and, in men’s hockey, progress toward the NHL.

NCAA hockey produced a record 314 NHL players in 2016-17, comprising 32% of the league (also a record). The Stanley Cup champion Pittsburgh Penguins featured the most former NCAA players of any team in NHL history.

“The NCAA develops tremendous talent and expanding the number of schools at the Division I level, for us, is a no-brainer,” Bettman said.

The NHL and NHLPA and the league’s teams will encourage additional schools to conduct feasibility studies.

Buffalo Sabres owener Terry Pegula – whose gift launched the Penn State men’s and women’s programs – and Arizona State men’s head coach Greg Powers both attended the announcement of the new program. After witnessing first-hand the rapid growth their programs have enjoyed, Pegula and Powers are both hopeful that others will join the Division I ranks.

Pegula talked about Nate Jensen, a Penn State alum who scored the first goal at Pegula Ice Arena and now works for Pegula in his oil and gas business.

“I find it interesting that the NCAA hockey road can lead in two places: a hockey career, or a career in business,” Pegula said. “We in the NHL are proud to support NCAA hockey.”

Powers leads the most recent team to join the Division I men’s ranks.

“Seeing first-hand the impact a Division I hockey program has had on a non-traditional market like Arizona, I can only imagine how great of an impact it would have in traditional markets like Illinois,” Powers said. “Hopefully, schools from everywhere will see the positive impact.”

Both Penn State and Arizona State’s new programs began thanks to significant donations. Schools that take advantage of the NHL and NHLPA’s feasibility study project may still need charitable contributions before starting a program, but it’s hoped that they will see the benefits of adding hockey before being presented with a multi-million-dollar gift.